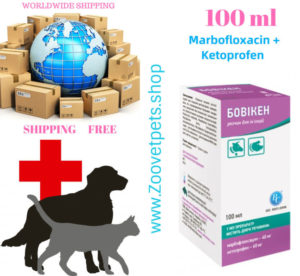 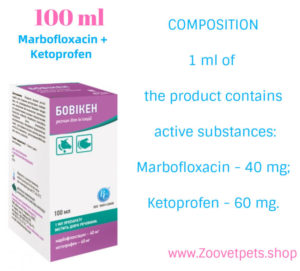 1 ml of the product contains

The active substances of the drug are the antibiotic marbofloxacin, which belongs to the group of fluoroquinolones, and ketoprofen – NSAIDs.

Ketoprofen is a NSAID based on propionic acid. It has analgesic, anti-inflammatory and antipyretic effects. The mechanism of action is associated with inhibition of prostaglandin synthesis at the level of cyclooxygenase. In addition, ketoprofen inhibits lipooxygenase, has anti-bradykinin activity, stabilizes lysosomal membranes, and causes significant inhibition of neutrophil activity. Ketoprofen is a dual inhibitor of inflammation, blocking the cyclooxygenase and lipooxygenase action pathways, thus preventing the formation of prostaglandins and leukotrienes.

After parenteral administration, marbofloxacin is rapidly absorbed and reaches a maximum plasma concentration of 1.5 mg/ml in less than 1 hour. Bioavailability is close to 100%. Marbofloxacin binds poorly with plasma proteins (less than 10% in pigs and 30% in cattle), it is well distributed in most tissues (liver, kidneys, skin, lungs, uterus) and reaches higher concentration than in plasma. Marbofloxacin is slowly excreted from young cattle (t1 / 2 = 5-9 hours) and pigs (t1 / 2 = 8-10 hours), rather – in adult cattle (t1 / 2 = 4-7 hours), mainly in active form with urine and feces.

Ketoprofen is rapidly absorbed from the injection site. More than 98% is bound to plasma proteins and accumulates in inflamed tissues. Ketoprofen is metabolized in the liver to inactive metabolites, and 90% is excreted in the urine as glucuronide compounds

Treatment of cattle and pigs for respiratory diseases accompanied by pain syndrome, inflammation or fever and caused by microorganisms sensitive to marbofloxacin (Pasteurella multocida, Mannheimia haemolytica, Mycoplasma bovis, Actinobacillus pleuropneumoniae, Mycoplasma hyopneumoniae) treatment of cows with acute mastitis, as well as of sows with MMA syndrome (metritis-mastitis-agalactia), caused by microorganisms sensitive to marbofloxacin.

DIRECTIONS FOR USE AND DOSAGES

Slaughter of animals for meat is allowed 4 days (pigs) and 7 days (cattle) after the last drug administration. Consumption of milk shall be allowed 4 days after the last drug administration. Meat and milk obtained before the specified period shall be utilized or fed to unproductive animals depending on the opinion of the veterinarian.
Swelling, painful and inflammatory reactions may occur at the injection site.

Shelf life after the first withdrawal from the bottle is 14 days in aseptic conditions, and further storage of the container with the drug at 10 ° C to 15 ° C.

Be the first to review “100 ml ( Marbofloxacin + Ketoprofen ) in cattle and pigs for respiratory diseases accompanied by pain, inflammation or fever analog Marboquin™, Zeniquin®” Cancel reply