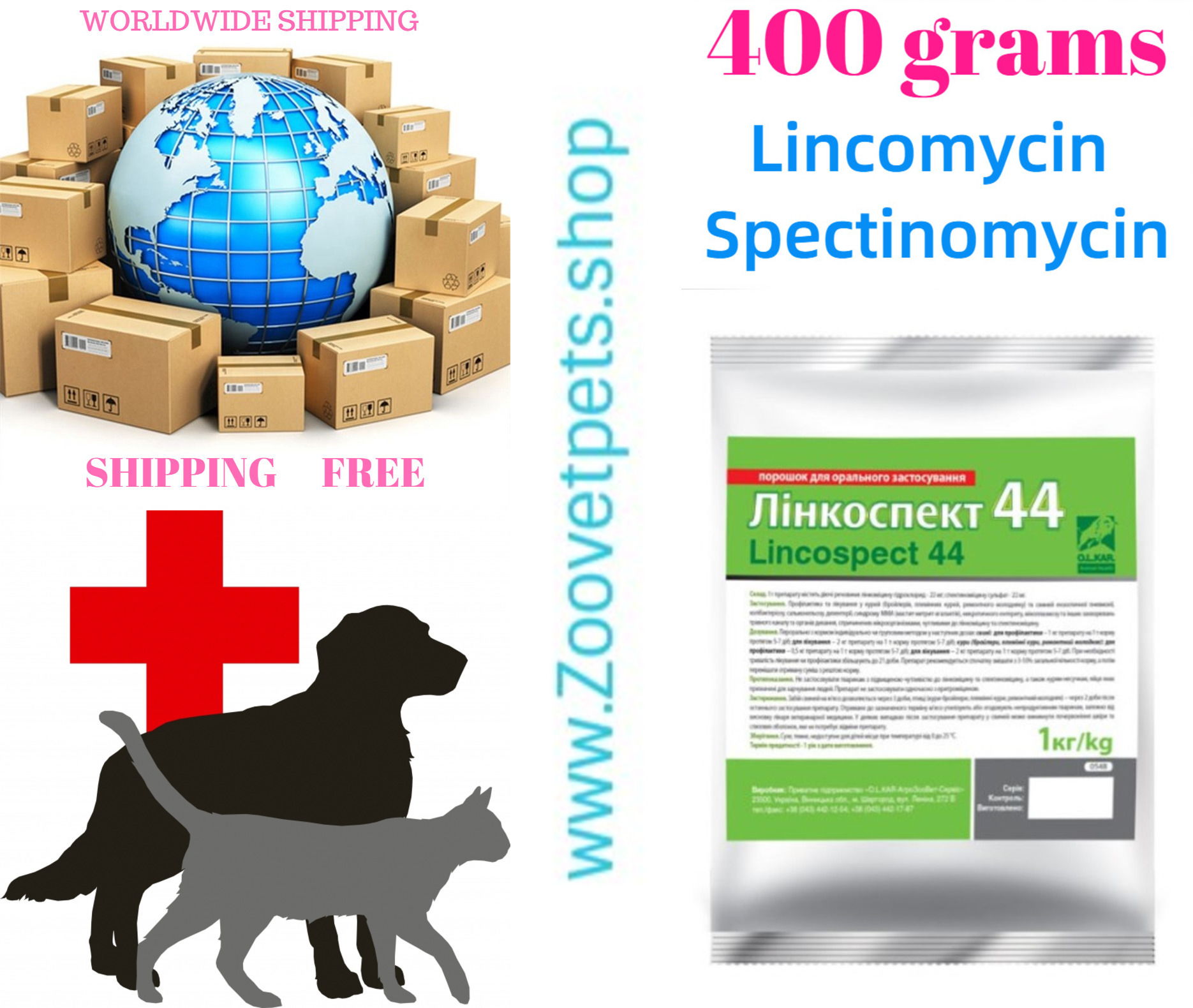 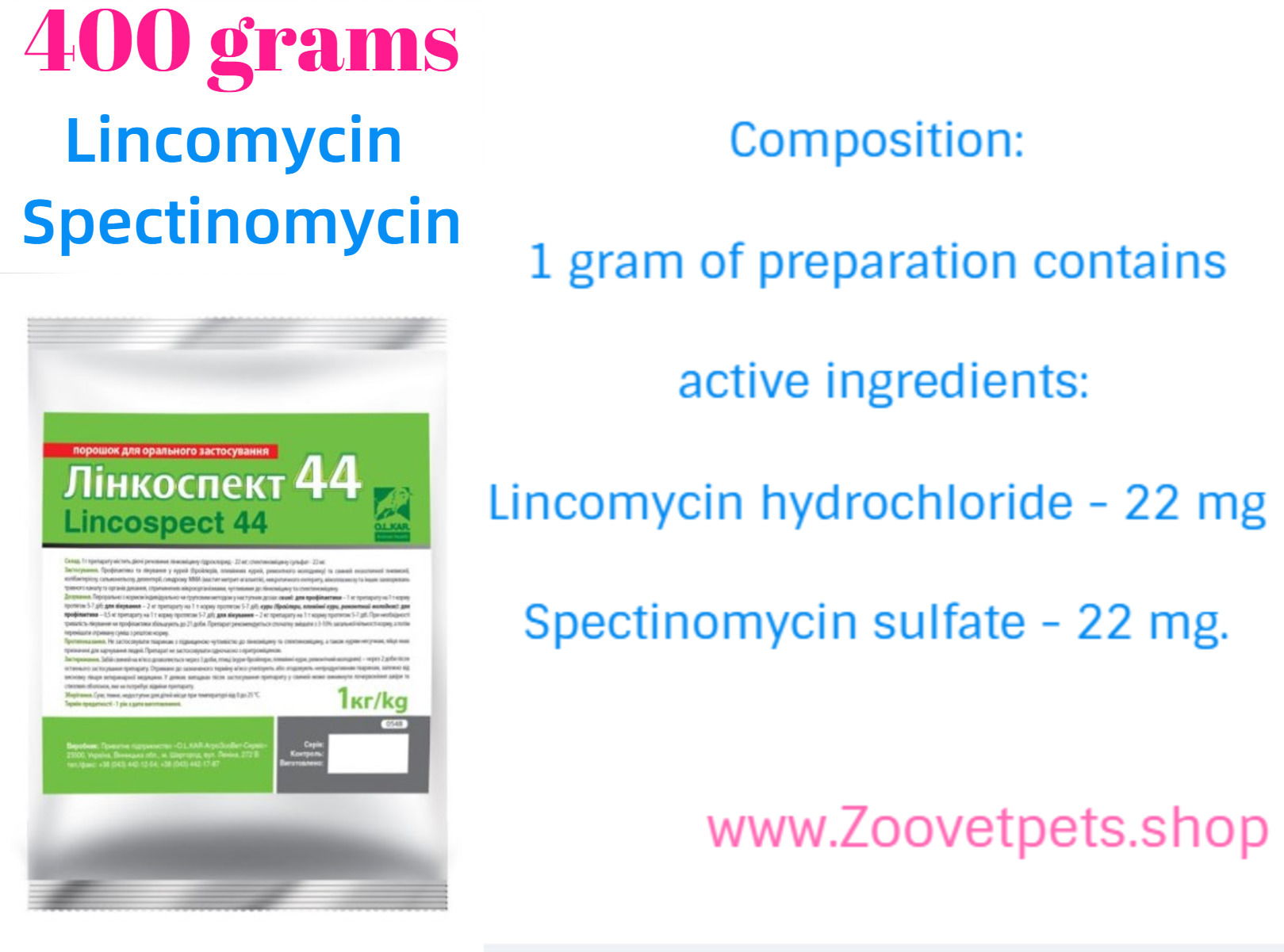 1 gram of the product contains

The preparation has a wide range of antimicrobial action against Gram-positive and Gram-negative bacteria.

Lincomycin is an antibiotic from the group of lynchosamides.
It inhibits protein synthesis in microorganisms by binding to the 50S ribosomal subunit of bacterial cells. The substance has a bacteriostatic or bactericidal effect, depending on the concentration. Lincomycin mainly affects gram-positive microorganisms, including Staphylococcus spp., Streptococcus spp., Bacillus anthracis, Corynebacterium spp., as well as gram-negative bacteria: Actinobacillus spp., Bordetella spp., Some species of Nocardias and Actinomyces spp., especially effective against Serpulina hyodysenteriae, Mycoplasma spp. and others.

Spectinomycin is an antibiotic of tricyclic structures of aminoglycosides group.
Its effectiveness is related to the suppression of protein synthesis in a microbial cell, binding to 30S ribosome subunit of microorganisms, prevents the elongation of polypeptide chain at the stage of translocation.
The substance acts mainly on gram-negative microorganisms including E. coli, Pasteurella multocida, Salmonella spp., Clostridium spp., Erysipelothrix rhusiopathiae, Haemophilus spp., Vibrio spp., as well as on some gram-positive microorganisms and Mycoplasma spp.

After ingestion, lyncomycin is well absorbed from the digestive tract and well distributed in the organs and tissues, including bone tissue.
Lincomycin binds to proteins by 50%. The concentration of lyncomycin in serum is reached 2:00 after administration.
The half-life period is 2.5-4 hours.
Most lyncomycin and its metabolites are excreted mainly with urine and bile. Small amounts of the substance are excreted through the intestinal tract.

Oral with drinking water or food, individually or in groups, once a day in the following doses:

When using the drug with feed it is recommended to first mix with 3-10% of the total feed, and then mix the resulting mixture with the rest of the feed.

When using the drug with drinking water solution is prepared on the basis of the required amount of drinking water for certain age categories of birds for 1 day. Daily prepare a fresh solution of the preparation.

Do not use animals with hypersensitivity to lyncomycin and spectinomycin.

Do not use chicken laying eggs, which are intended for human consumption.

Do not use simultaneously with macrolides, chloramphenicol, ampicillin, kaolin, myorelaxants and anesthetics.

During treatment, do not prescribe medications that suppress intestinal peristalsis.

Do not use rabbits, hamsters, guinea pigs, horses, and especially ruminants; this can lead to severe complications of the gastrointestinal tract. Do not use in animals with impaired kidney and liver function.

Do not use pigs during pregnancy, lactation, and breeding.

It is allowed to slaughter animals and poultry for meat in 3 days (pigs) and 2 days (broilers, repair young animals, breeding hens) after the last application of the drug. The meat is disposed of or fed to non-productive animals before the specified period, depending on the conclusion of the veterinary medicine doctor.

In the process of mixing the preparation with feed it is necessary to use personal protective equipment (respirator, gloves).

Shelf life – 2 years from the date of manufacture.