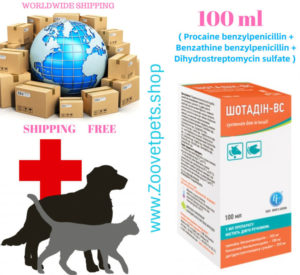 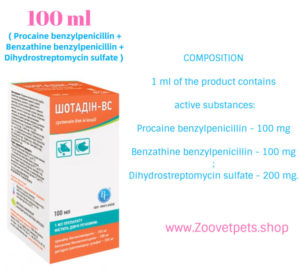 1 ml of the product contains

Procaine benzylpenicillin shows bactericidal effect mainly on Gram-positive bacteria. The action of the substance is based on inhibition of the activity of enzymes of peptidoglycan synthesis, which leads to cessation of bacterial growth, and also activates enzymes that hydrolyze peptidoglycan, which weakens the covalent bonds of the cell wall. Bacterial cells stop dividing, enlarge, swell and disintegrate with the formation of small particles. The peculiarities of benzylpenicillin procaine are slow absorption and prolonged action when administered.

Penicillins are highly active against Gram-positive microorganisms (Staphylococcus spp., Streptococcus spp., Corynebacterium diphtheriae and others). The mechanism of action is based on disruption of synthesis of mucopeptide peptidoglycan, which leads to inhibition of synthesis of the cell wall of the microorganism, suppression of growth and reproduction of bacteria.

Dihydrostreptomycin is an aminoglycoside antibiotic that acts bactericidally on Gram-negative and Gram-positive microorganisms (Pasteurella spp., Salmonella spp., E.coli, Klebsiella spp., Hemophilus spp., Brucella spp., Shigella spp., Mycobacterium spp.). The antibacterial effect is based on the binding of the streptomycin molecule to the ribosomal 30 S subunit of the microbial cell, which leads to the formation of inferior proteins, stopping the growth and development of the bacteria. Unlike benzylpenicillin procaine, dihydrostreptomycin sulfate acts on microorganisms in both the reproduction and quiescent stages.

DIRECTIONS FOR USE AND DOSAGES

Shake the drug vial thoroughly before use.
Intramuscularly (pigs) or subcutaneously (cattle, dogs, cats) in dose 1 ml per 22lb (10 kg) of animal body weight once.
In severe cases repeated administration of the drug after 3 days is recommended.

STORAGE Dry, dark place at the temperature from 39-46F (4°C to 8°C), kept out of reach of children and animals, separated from foodstuff.

After the first withdrawal from the bottle, the drug should be used within 28 days if stored in refrigerator at 39-46F (4 °C to 8 °C).