15ml ( Dexmedetomidine hydrochloride 0,1mg ) for sedation and analgesia in dogs and cats during surgical operations, various clinical studies, as well as to prevent animal aggression Dexdomitor® 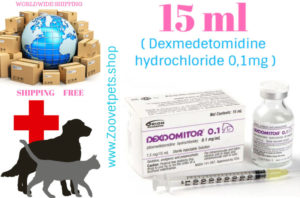 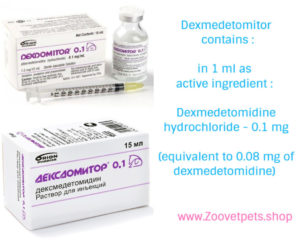 Instructions for the use of Dexdomitor® for sedation and analgesia in dogs and cats.

Doses of the drug Dexdomitor for dogs for deep sedation and analgesia with butorphanol:

The planned sedative and analgesic effects are achieved within 15 minutes after administration and are maintained for 60 minutes after administration.
To maintain a sedative and analgesic effect, the drug can be re-administered 10-15 minutes after the first injection. The dose of repeated administration is determined by the veterinarian, depending on the condition of the animal.
If necessary, sedation can be inverted with Antisedan drugs.
A suitable lubricant should be used to prevent dry eyes.
After using the drug, animals should be kept warm and at a constant temperature, both during the procedure and during the recovery of consciousness.
It is recommended not to give food to animals for 12 hours before the administration of Dexdomitor, water intake is not limited.
After administration of the drug, the animal should not be given water or food until it is able to swallow.
Nervous, aggressive or agitated animals should be allowed to calm down before administration of the drug.
Respiratory and cardiac performance should be monitored regularly. Pulse oximetry can be useful, but not essential for adequate monitoring. When dexmedetomidine and ketamine are used sequentially to induce anesthesia in cats, manual ventilation equipment should be available in the event of respiratory depression or apnea. It is also recommended to have access to oxygen in case of detection or suspicion of hypoxemia.
Sick and debilitated animals should be premedicated with Dexdomitor prior to induction and maintenance of general anesthesia only on the basis of an assessment of the risk-benefit ratio.
Overdose of the drug can lead to a delay in awakening after anesthesia and sedation. In some cases, depression of blood circulation and respiration is possible.
In case of an overdose, or if the effect of the drug Dexdomitor becomes potentially life-threatening to the animal, it is necessary to enter the appropriate dose of the drug Antisedan.
Antisedan is administered intramuscularly once.
For dogs, the dose of Antisedan in ml is equal to 1/5 of the dose of Dexdomitor with a dexmedetomidine content of 0.1 mg / ml and is equal to the dose of Dexdomitor with a dexmedetomidine content of 0.5 mg / ml.
For cats, the dose of Antisedan in ml is equal to 1/10 of the dose of Dexdomitor with a dexmedetomidine content of 0.1 mg / ml and is equal to half the dose of Dexdomitor with a dexmedetomidine content of 0.5 mg / ml.
In case of continued depression in the animal, you can re-enter Antisedan after 10-15 minutes.
Immediately after the administration of the drug, a decrease in blood pressure is possible, which is then restored to normal values ​​or values ​​slightly below normal. In dogs, and especially in cats, vomiting is possible in the first minutes after the
injection of the drug.
The safety of Dexdomitor for pregnant and lactating animals has not been established, therefore it is not recommended to use the drug for pregnant and lactating animals.
Violation of the dosage regimen of the drug should be avoided.
With the introduction of the drug Dexdomitor, a decrease in heart rate, respiratory movements and hypothermia are possible.
Blood pressure first rises and then returns to normal or falls below normal.
Vomiting may occur 5-10 minutes after administration. In some dogs and cats, vomiting may occur when consciousness regains consciousness.
Sometimes pallor and / or cyanosis of the mucous membranes develops. Drying of the mucous membranes of the eyes and cornea is often possible in cats.
During sedation, muscle tremor may occur, in rare cases, corneal opacity, pulmonary edema.
When using the drug Dexdomitor as a means of premedication in dogs, bradypnea, tachypnea, and vomiting are possible. Bradyarrhythmias and tachyarrhythmias may also occur, including deep sinus bradycardia, atrioventricular block (grade 1 and 2), and sinus arrest. In rare cases, premature supraventricular and ventricular extrasystoles, pause of the sinus node and atrioventricular block of the 3rd degree are observed.
When using the drug Dexdomitor as a means of premedication in cats, vomiting, urge to vomit, pallor of the mucous membranes and low body temperature are possible. At an intramuscular dose of 40 mcg / kg (followed by the introduction of ketamine or propofol), sinus bradycardia and sinus arrhythmia often occurred, sometimes atrioventricular block of the 1st degree and rarely premature supraventricular depolarization, atrial bigeminia, pause of the sinus node or 2nd degree atrial delayed ventricular contractions.
With the simultaneous administration of ketamine at a dose of 10 mg / kg to cats and dexmedetomidine at a dose of 40 μg / kg, tachycardia may develop.
With the sequential use of the drug Dexdomitor and ketamine with an interval of 10 minutes in cats, atrioventricular block or extrasystole may sometimes occur. The expected events are: infrequent breathing, intermittent breathing, hypoventilation, apnea. Hypoxemia is noted, especially in the first 15 minutes of dexmedetomidine-ketamine anesthesia. After such procedures, vomiting, a decrease in body temperature and nervousness were observed.
With the simultaneous use of the drug Dexdomitor and butorphanol in dogs, there may be rare breathing, rapid breathing, irregular breathing (apnea for 20-30 seconds followed by several quick breaths), hypoxemia, muscle cramps or tremors, floundering, agitation, increased salivation, urge to vomiting, vomiting, urination, cutaneous erythema, sudden awakening or prolonged sedation. Bradyarrhythmias and tachyarrhythmias are possible and may include sinus bradycardia, grade 1 and 2 atrioventricular block, sinus node arrest or pause, and premature atrial, supraventricular, and ventricular premature beats.
Dexdomitor potentiates the effect of drugs that depress the central nervous system: tranquilizers, sedatives, general anesthetics, therefore, the dose must be adjusted accordingly.
Dexdomitor is not intended for use in productive animals.

IV. Personal prevention measures
When working with Dexdomitor, you should follow the general rules of personal hygiene and safety measures provided for when working with medicinal products. At the end of work, you should thoroughly wash your hands with warm water and soap. In case of accidental contact of the drug with the skin or mucous membranes of the eyes, they must be rinsed with plenty of water. People with hypersensitivity to the components of the drug should avoid direct contact with it. Empty vials from under the medicinal product must not be used for domestic purposes, they must be disposed of with household waste.
In case of allergic reactions or accidental ingestion of the drug into the human body, you should immediately contact a medical institution (you should have instructions for use or a label with you) and in no case should you drive a car.

Be the first to review “15ml ( Dexmedetomidine hydrochloride 0,1mg ) for sedation and analgesia in dogs and cats during surgical operations, various clinical studies, as well as to prevent animal aggression Dexdomitor®” Cancel reply